We had a pretty good tournament over the Memorial Day weekend.  Andrew pitched a complete game and we won a 5-4 decision.  The team we beat had some other McGregor boys on it so he was really pumped.  We lost both of our games on Sunday but we played pretty well in the second game.  We lost 3-2.   Andrew went 1-for-2 and 2-for-2.  In the second game, one of his hits was a line drive double in the gap.  He really smashed it. I’m glad he is out of his batting funk.  This weekend raised his batting average to .382.  His slugging percentage is .529.

Andrew had been in a bit of a slump lately.  That is probably an understatement, actually.  He had not gotten a hit in several weekends and his batting average had dropped below .200.  He really busted out of his slump on Sunday, though!  He went 4-for-4 in the first game with a home run (his first over the fence–I stepped it off at around 200 feet), a double and 3 RBIs.  He went 2-for-3 in the next game with 1 RBI. Sunday’s games pulled his average up to .357.   He had been really frustrated, so I was glad to see him do what we both knew he could do.  Best of all, we won a hard-fought game on Sunday and the entire team played well.  It was a GREAT weekend! 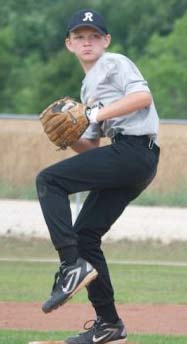